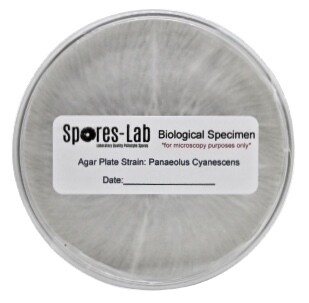 Panaeolus Cyanescens (also known as Copelandia Cyanescens or Blue Meanies)(not to be confused with Psilocybe Cyanescens), is a psychoactive mushroom in the Bolbitiaceae family. It's primary active compounds are Psilocybin and Psilocin, however over 30 different psychotropic alkaloids have been identified in the species. This mushroom species is known as one of the more potent psychoactive mushrooms, and according to research published by Paul Stamets and Jochen Gartz it is the 4th most potent psilocybin-containing mushroom in the world!

Spores Lab acquired our Panaeolus Cyanescens genetic at the beginning of 2021, and we have been hard at work for the last few months isolating and refining the genetic to prepare it for sale. Although our Pan Cyan genetics have been extensively isolated, the species is grown using the same (or very similar) mediums as Psilocybe Cubensis, and can be grown in similar conditions, Pan Cyan yields are significantly lower than Cubensis -- BUT each mushroom is of higher potency.

Growing Panaeolus Cyanescens can be done either in an artificial environment, or outdoors if the climate is sufficiently warm and humid. Spawning is done in a similar fashion to Psilocybe Cubensis (the most commonly grown psychoactive mushroom), and rye, wheat, oat, corn or other grains can be used. Similar substrates (CVG or straw) can also be used, however unlike Cubensis, Panaeolus Cyanescens require the addition of a casing layer in order to fruit. Experienced cultivators suggest that a thin casing layer (1cm thick) of pH balanced peat moss and vermiculite performs best.

Cap: 1.5 – 4 cm across, dry, at first hemispheric, expanding to campanulate to convex, with an incurved margin when young. Young caps start out light brown and fade to off-white or light gray at maturity, sometimes with yellowish or brownish tones. Often developing cracks in dry weather, slightly hygrophanous, turning greenish or blue where damaged.

Stem: 7 – 12 cm long by 2 to 3 mm thick, equal to slightly enlarged at the base, coloured similar to the cap, staining blue where bruised.