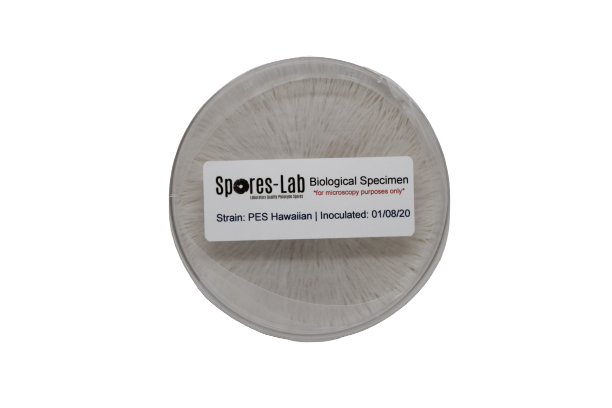 Despite its name the 'PES Hawaiian' strain did not actually orginate in Hawaii, as no psilocybin cubensis mushrooms grow naturally there. The name is derived from the Hawaii-based company Pacific Exotica Spora, which was the first to offer spores of this strain.

The PES Hawaiian magic mushroom strain is well reviewed on several online communities, and often elicits strong visual stimulation, feelings of euphoria, love, and connection to those around you, however somewhat less deep introspection or philosophical ideation. This makes it a great "social" strain to enjoy with friends, but slightly less suited to therapeutic or spiritual use.

Its visual characteristics are exemplary of a "classic" psilocybe cubensis - medium/large mushroom fruiting bodies with thick, dense stalks and a golden caramel to tan colored cap, often with a dark spot in the centre of the cap. It is a moderate-high potency strain that yields heavily for approx 3-4 'flushes'.