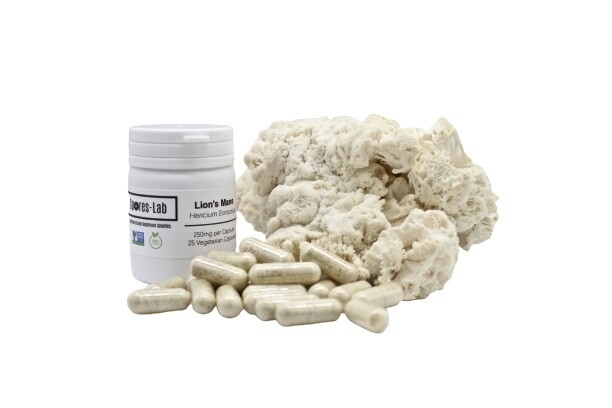 The Hericium Erinaceus Fungus (commonly known as Lions Mane Mushroom) derives both it's Latin, and it's common English name from the appearance of it's fruiting bodies - which resemble both a hedgehog (Hericium in Latin is Hedgehog) and the flowing, wispy mane of a Lion.

This species of Fungi is renowned as both an excellent culinary mushroom, and a valuable medicinal mushroom. Lions Mane is gaining popularity as a nootropic supplement due to the results of several studies, performed at esteemed institutions, for its positive effects on neural health, Alzheimer's, and dementia. Both the mycelium and the fruiting bodies of this species contain a substance called erinacine, which causes increased production of nerve growth factor (NFG). Higher levels of NFG have been shown to reduce the effects of Alzheimer's and other neurodegenerative disorders (Yamada et al., 1997).

Our Lions Mane Mushroom supplement capsules are growing using 100% organic substrates, in a sterile HEPA-Filtered facility located in Vernon, British Columbia, Canada. Many other Lions Mane products on the market are made with Lions Mane sourced from China, where questionable cultivation practices and heavy pollution often result in higher levels of toxic compounds found within the mushrooms.

Because Spores Lab cultivates at commercial scale and performs all processes from "spore-to-sale" in-house, we can offer pricing which is competitive with many other companies who source mushrooms of questionable quality from Asia.

Lions Mane Mushrooms have been studied for their effectiveness in treating several neuro-degenerative conditions such as Alzheimers, Dementia, and Nervous system injuries.

Test-tube studies have also found that lion’s mane extract can help prevent the oxidation of cholesterol in the bloodstream.

Some research suggests that lion’s mane mushroom also has cancer-fighting abilities, thanks to several of its unique compounds.